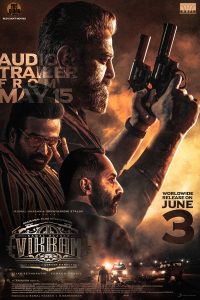 Vikram Movie is a 2022 Indian Tamil-language action thriller film.
Which is written and directed by Lokesh Kanagaraj.
The film stars Kamal Haasan, Vijay Sethupathi and Fahadh Faasil.
Narayan and Chemban Vinod Jose play supporting roles while Suriya plays a cameo role.
The film is the spiritual successor to the 1986 film of the same name, also starring Hassan.
*story
Amar is a cop Amar is assigned the task of investigating a case of serial killing. When Amar investigates the matter, he learns that it is not what it seems and that walking down this path will lead to nothing more than a war between all those involved.